The Indian navy is taking steps to combat terrorism at sea.

Speaking at a press conference in New Delhi on Wednesday, India’s navy chief Adm. R. K. Dhowan addressed a variety of issues concerning India’s efforts to bolster maritime security, including the security consequences of the September 2014 incident in Pakistan when Al Qaeda militants attempted to seize the PNS Zulfiqar, a Pakistani navy frigate, and China’s naval inroads in the Indian Ocean. Dhowan’s comments addressed the issue of Pakistan-borne terrorism on the high seas a week after the sixth anniversary of the November 2008 terrorist siege of Mumbai. Those attacks highlighted India’s coastal vulnerabilities as one group of terrorists successfully entered Indian territory in inflatable speedboats without any opposition or scrutiny.

Based on Dhowan’s comments, India is taking maritime terrorist threats seriously. As the September 2014 incident in Pakistan demonstrated, Al Qaeda and related groups could look to hijack naval vessels to stage attacks against Indian vessels in international waters. “Threat in the maritime domain from terrorists, non-state actors is huge… terrorists trying to commandeer a ship is a serious situation… We have taken note [of the Pakistan incident],” Dhowan said. “We have [250,000] fishing boats in the country… any one can take up arms, ammunition in remote islands. [There are] 1197 islands and 7016 km of coastline. [It speaks to] how easy it is from the other side and how difficult it is for us to secure,” he added.

Dhowan suggested that, as a precautionary measure, Indian seamen would likely change their communications protocol at sea when approaching an unknown vessel: ”When the officer of the watch reports to the captain, ‘We have a warship from another navy on our starboard bow,’ the captain would say, ‘Wish him good morning,’ as he is in international waters and so are you. But in this changed environment, we may not wish him any longer. Instead we may have to find who he is.”

Referencing the security lapses that allowed terrorists to enter Mumbai in November 2008, Dhowan noted that “a lot has been done” to secure India’s coasts since then but efforts were ongoing. The Indian navy has initiated an effort to establish coastal security radars along previously vulnerable coastal areas near major cities as part of the National Command Control Communication Intelligence (NC3I) network. The NC3I initiative was inaugurated by India’s new defense minister, Manohar Parrikar, under two weeks ago.

“The seas are no longer a benign medium… the threats are real. The global commons has become very vulnerable because of challenges posed from asymmetric warfare and maritime terrorism to piracy and floating armouries,” Dhowan continued. The Indian admiral additionally addressed growing concerns about China’s maritime activities in the Indian Ocean: ”China has been deploying nuclear submarines. India is concerned. But India cannot do much as these are international waters,” he told NDTV. Recently, Indian commentators highlighted a Chinese submarine stopover in Sri Lanka as a sign of China’s continued naval access to the Indian Ocean. China has also been working to deepen its maritime cooperation with other Indian Ocean littoral states, including the Maldives, Bangladesh, and Iran.

Addressing gaps in India’s naval capabilities, Dhowan noted that India’s “lack of submarines and helicopters is a concern but we have to fight with what we have.” To keep up with China’s naval modernization, India is heavily investing in naval technology, including supersonic cruise missiles, indigenous nuclear submarines, and multi-role frigates. 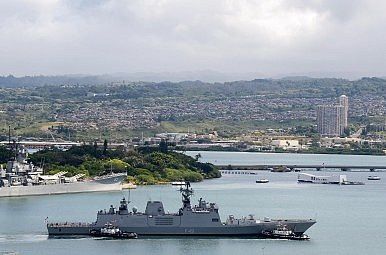